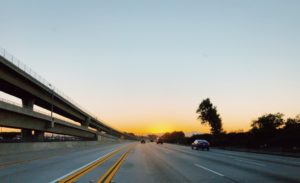 In Southern California, we know that earthquakes come with the territory. So, we prepare our homes and workplaces for such an event. But, what about our cars? Many of us spend a substantial portion of the day in our cars…with our families, too!

So, what are the chances that we’ll be in our car when the next earthquake hits?

I imagine it’s a likely scenario. That’s why I’ve decided to prepare my car and family for this type of occurrence. Here’s a list and a bit of descriptive reasoning behind some of the items I’ve chosen:

I like the idea of all our items zipped up in a bag as opposed to a box. I’m less likely to grab something out of a backpack than a box. Therefore, keeping my bag packed and untouched so that it’s ready if/when I really need it.
I also like knowing that there’s a backpack that I can easily carry with me if I have to leave the car and walk/run to safety. The backpack is also in consideration of our three kids. It’s very possible that I’ll be alone in such an event so, I’ll definitely need both hands free.  A backpack will allow that!

In my backpack, I’ve packed the basics:

Water bottles, snacks (that aren’t sensitive to heat), and some small toys/coloring books for entertainment (should we be confined to waiting out traffic in our car). There are diapers, wipes, hand sanitizers, and a small first-aid kit.
An umbrella is important, too. Rain isn’t a major part of our Southern California lives, but umbrellas are also great providers of shade! It may not be needed at all but, it could up the comfortability factor should you have to walk at high-noon.

I’ve also attached a baby carrier to the backpack.

Specifically, we use an Ergo 360 because it allows me to strap a baby OR a small child to my chest comfortably. And, given that I have multiple children, anything that can offer me aid in traveling on foot with all three kids is deemed worthy for our emergency kit. (Still, I’m crossing my fingers now that our stroller is in the trunk – where it’s supposed to be – in such an event).

I think it’s safe to consider loss of power and jammed cell towers immediately following an earthquake.  That said, I’d recommend keeping a phone charger in the car so that you can receive alerts (hopefully).

And, if you’re like me and my husband, sharing iCalendars may prove helpful in determining where the other person is at the time of an earthquake.

Like I mentioned, cell towers will likely be jammed. However, wouldn’t you feel better knowing where the other person was or most likely was during an earthquake? For instance, my husband works out in the Inland Empire between several hospitals. And, I am running around Orange County with kids all day. I think we’d both have peace of mind knowing where the other was in an emergency. Not to mention, it would sure make it easier to know where the other was, even approximately, should you have to go looking for them.

Second, and not to be morbid, I’ve considered even the worst of scenarios.

One of them being the result of a traffic accident. Should I become incapacitated, I worry about my non-verbal child who is still only 8 months old. That’s why I put tags on all my kid’s carseats.
On these tags, I’ve included our most pertinent information: Name, date of birth, emergency contact numbers, medic alerts, and insurance ID numbers.

However, of all this information, the most important is their carseat number.

This may seem silly, but I want any first responders to know that I have three kids in the car. We have a third-row seat and if, all airbags have deployed, it may be not be immediately obvious. So, I’ve assigned a number 1 of 3, 2 of 3, and 3 of 3 to each carseat. Check out these easy tags I made using a WordDoc and shipping tape!

Preparing for the Best Outcome

Some of us are just not planners. The thought alone of such an event occurring may be anxiety-provoking.  But, I would encourage you to at least shop amazon for an emergency pack and put a ready-made kit in your car as soon as possible.

If that’s too much and all you can muster up is some extra water bottles, do just that!

Preparing for the best-case scenario still includes preparing for heavy traffic. ApplePay and DoorDash won’t be of any help, but water in your car will be! And, finally, hope and pray for the most fortunate outcome for everyone should this occurrence actually come to fruition. 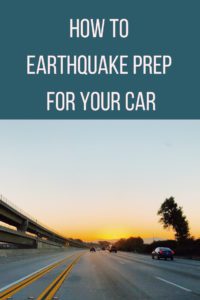