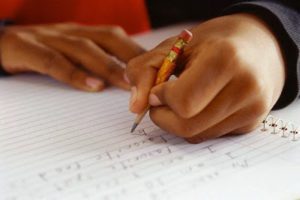 My son was born a lefty. This is not hyperbole. In truth, we saw him sucking his left thumb on ultrasounds with such regularity that he was born with a sucking callous, so you could say he favored his left even in the womb. I have video of the first time he reached for a toy with his hand at two months old, and it’s of course the left one. First ball thrown, first wave hello, first crayon grasped, always with his left hand. If a misguided adult put something in his right hand, he’d instinctively transfer it to his left even before he intellectually knew the difference between left and right. There just was never any question of which was his dominant side.

It runs in the family.

My father is left-handed. Four of my best friends from childhood are too. I also believe I was supposed to be one because I have vivid memories of receiving extra help in kindergarten learning to write with my right hand. To this day I still prefer to do certain things with my left versus my right hand. (By the way, just because you are left-handed doesn’t mean your parents are too. Even when both parents are right-handed, they still have a 9.5% chance of having a southpaw).

In my mother’s native Korea, where the traditional culture favors conformity over individuality, being left-handed was looked down upon. Koreans feel so strongly about this in fact that I have a cousin who learned to write with his left hand literally tied behind his back and to this day uses his left hand for everything except holding a pen because, duh, he’s supposed to be left-handed!

It’s not just Koreans though. Suppressing left-handedness goes back thousands of years to the dawn of civilization. In India for instance, tradition dictates you eat with your right hand, wipe with your left. In the English language, the word sinister, meaning evil, comes from the Latin root sinister, which really just means left. There is an extensive and pervasive history of how and why left-handedness connotes evil in many cultures around the world.

Anyway, now that it’s established that my son’s a lefty, what’s the problem? Well, lots actually.

For starters, it makes learning rudimentary skills that much harder. Things that us right-hand dominant folks never even think twice about:

Zipping up a jacket

And most especially scissors!

In fact, I had to buy lefty scissors for his preschool just so he’d be able to keep up with his classmates (and that didn’t end up working out because they promptly went missing. So he ended up learning to cut using righty’s by inverting his left hand and aiming towards his body instead of away!).

Even reading a book in English, if you think about it, is made for right-handed people because you read from left to right and it’s easier to turn the page with your right hand. Now you might say that with everything going digital it no longer matters what your dominant hand is, but still many apps are designed with buttons on the right side of the screen, and even the QWERTY keyboard is set up to favor a right hander (the “important” buttons like delete, return, and arrows are all typically on the right side).

Sometimes it feels like the world is stacked against lefties.

My son has invented clever ways of getting around these right-handed obstacles. For example, he likes to read picture books from the last page to the first (right to left) and prefers to tear paper out of a notebook before using it. We’ve also tried to make things easier for him by buying pants with elastic instead of zippers until his fine motor skills become more adept.

Please don’t get me wrong: I love that he is left-handed.

It means that he is in a distinguished minority. Though only 10% of the population is left-handed, they tend to be creative thinkers and high achievers. Four of the past seven Presidents have been lefty. “South paw” athletes are prized commodities (my husband is already dreaming of our son receiving a water polo college scholarship). A large percentage are artistically talented. Here’s a recent list of famous lefties, some of whom may surprise you!

But still, as his mom I can’t help but worry about the additional challenges he’ll face out in the world.

It annoys me to no end when a well-meaning adult mindlessly treats him like he’s right-handed. I imagine how he’ll need to expend extra time and energy throughout his school years learning work-arounds for things that are tailor-made for his right-handed peers, and how that’ll both set him back from them in educational progress and also make him hyper aware of being different from them too.

I remember laughing when I watched that episode of The Simpsons where Ned Flanders opens up the Leftorium store. Now I wonder, does that exist? Should I buy everything from there? In fact, it kinda does and yes I kinda will!

So what can I do to help my little lefty?

Well, I never encourage him to use his right side over his left for starters. I am also trying to make sure he never feels bad about being a southpaw, so am educating both him and myself on all the ways in which lefties are awesome. And when he becomes the next President/Olympic waterpolo player/Bill Gates/Oprah Winfrey, I’ll be standing in the audience giving him a big thumbs up…with my left hand of course.