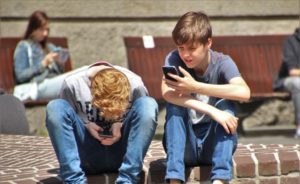 Remember in the infant/toddler years when you would gather with your mom friends, or tribe, or squad…or just other moms who were operating on 50% sleep and 30% fumes and 20% caffeine? Your tikes would be placed on a mat and they would play with their toys adjacent or ‘parallel’ to each other. Moms would ooh and ahh at the overwhelming cuteness, “Look! Sami is so engaged on the play toy phone and Baxter is just looking on as if to say ‘lady, why aren’t you looking at me’?!” The moms would laugh.

Cut to: NOW. The kids are teenagers and Sami’s phone has been replaced by a real iPhone and Baxter’s truck is now a real iPhone, too.

The moms still get together for mom juice, but can now call it what it is: wine. The kids still parallel play…but the parallel play looks like both kids vying for future neck problems as their heads are bent forward gazing at their electronic devices while scrolling endlessly through various social mediums.

This is the new parallel play and from my perch, it’s here to stay.

I’ve spoken with many moms about this as my family ship is currently heading into teenage waters. Some moms throw their hands up, “What can we do?” To that I want to respond with, “Don’t give them phones!”

However, I can’t judge them for this.

Life circumstances led to my own eldest child getting a phone. Granted, there are restrictions and limits set on her phone, i.e.: no social media and a setting that allows her access to her phone only at certain times of the day.

I don’t know if there’s a name for parents like me, but I’ll name myself the “Hovercraft Mom” – I hover and notice when she sneaks her phone. After all, she’s a kid and she’s not perfect. I’ll ask (that is, grill) her if her homework is done, and if it is, suggest she find a more productive way to spend her time than playing Candy Crush, and take her phone away.

I do have some mom friends who are monitoring their kid’s behavior on social media and setting boundaries, and I know some moms whose kids don’t even have phones (they’re my idols).

My God, they’re still kids! They should be playing! Whether it’s with toys, board games, or crafts, these things are imperative for healthy development. I believe the phones are the new TV in terms of acting as a babysitter. This recent study found that teens are experiencing loneliness at increasing levels and that it’s connected to the amount of time they’re spending on their phones and social media.

As a parent I am very, very concerned that my children and their classmates are not learning how to appropriately socialize and communicate with each other. I am concerned that they sit around a table staring at their phones instead of talking to each other. Or if they do interact, it’s via text or a social medium…while in each other’s presence.

It makes me sad when we are out to dinner with other families and the kids are not interacting with one another.

No one is stealing someone else’s fries, or challenging another kid to drink 5 glasses of water without having to pee, or just idle chitchat.

Kids aren’t learning the art of idle chitchat because kids are constantly entertained by their devices.

They’re not making memories, like we did, and still laugh about years later. “Remember that time when I drank 20 glasses of water at the Cheesecake Factory?!”

What will they reminisce about? I think we are kidding ourselves if we think this will not affect them as adults and in the workforce, because it’s already affecting them now. The uptick in depression, anxiety, and suicide amongst teens due to social media is alarming. Some, like this article on Medium, are comparing the addictive nature of social media to smoking cigarettes.

As a mom of kids about to become teenagers, I’ve realized that it’s up to me to keep them safe and monitor their behavior with these devices.

Even adults misconstrue texts and emails, so imagine what a child – whose brain isn’t fully developed – is thinking? There’s a kind of peer pressure even I as the parent feel to let my kids play on their phones. But if I’m going to give my children this kind of power early on, the onus is also on me to make sure they’re using it responsibly, right?

After all, as a mom I worked really hard to get my infants and toddlers to play with other children to only end up back where we started: parallel play.

So what are some solutions to this problem? Here are some ideas I’ve come up with:

What do you think? Am I onto something here or do I need to get with the times? Do you have any other suggestions to add to the list? 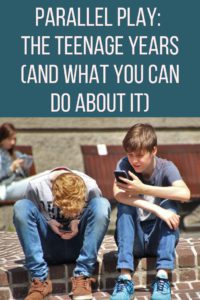