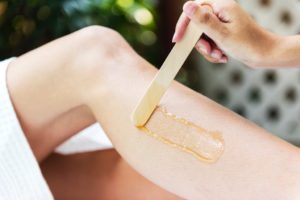 With summer and bikini season in full swing, I decided to give waxing a try. You know, down south. I’ve waxed my eyebrows and face before. But this time I went with the Brazilian and stomach. After much research of waxing compared to shaving, I went for it. I am over the gross painful razor bumps and there’s still hair! Plus, that’s doing more damage then you think. So here’s what happened when I compared waxing vs sugaring!

So I went to a well-known waxing center. Again, I went with the Brazilian, if you know what that means. Maybe I should have eased my way into waxing in general. But once I made my decision there was no going back! So we get into the room and immediately it’s freezing. She then asked me to undress from the waist down, while she’s still in the room. I was confused  I said something like “right now?” as she didn’t leave. Then I thought that was dumb of me to say since she’s going to be seeing a lot more when she waxes me.

Once you undress and lay down, they put baby powder so the wax doesn’t stick to your skin as much. The wax was so hot I swear it was burning me and I don’t remember it ever being this hot.

Wow did it hurt!

Especially when it’s your first time. Let’s come back to the freezing room. It makes complete sense because you sweat so much! I swear I left so much sweat behind it was crazy.

I will say there are quite a few negatives with waxing.

#1 being that the wax is WAY TOO HOT. You cannot go over the same spot more than a few times if the wax didn’t get it. You’ll just strip your skin which is not good and hurts. I feel it did not last as long for myself as well, since there were still unwanted hairs. I eventually got ingrown hairs, which is common. Lastly, it’s expensive.

This is also known as sugar waxing. I feel my experience with sugaring was more positive. After more researching and recommendations I found a small business nearby. This time I didn’t go full, just bikini line and stomach. So just a clean up.

Similar experience, once we got in she asked me to undress from the waist down but she actually left the room. She used baby powder as well so the wax doesn’t pull your skin.

Of course it hurt but not as much as traditional waxing.

What made it hurt with sugaring was that she puts it on against your hair which actually gets the hairs and hurts much more than pulling off. She described it as pins and needles. But you can go over as many times in the same area without causing discomfort or stripping your skin.

Afterwards my skin felt smooth and it left no unwanted bumps. I also didn’t get nearly any ingrown hairs. My overall experience was much more positive so I’m happy with the end results. Sugaring was not nearly as expensive and I walked out with no discomfort.

Based on these two experiences, I definitely recommend sugaring over traditional waxing. It’s much cheaper and was a much more positive experience. Note, I did not mention any business names.

What do you think about waxing vs sugaring? Have you tried them both??