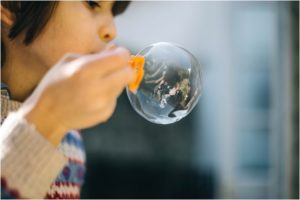 Does anyone know where I can buy a family-size bubble?  I would like to stick everyone I love in a bubble and keep them safe, is that too much to ask?

We all worry. I actually worry about the small stuff a lot less than the average Joe. If you are one of my Blog Groupies (I’m pretty sure I don’t have blog groupies but a girl can dream) you know that I was often mistaken for a mother on round two or three when I had my first because I didn’t sweat the small stuff.

Well here is a little secret…I sweat the big stuff!

Look, I’m a grief counselor. I’ve worked in hospitals and hospices. I also had five-year-old family member fight a brain tumor for five years and die at age ten. I have seen the big stuff and I see the big stuff. I get paid all day to help people not succumb to their anxious thoughts, but I’m human and sometimes I don’t succeed at this myself. Maybe it was the nerves leading up to this year’s Camp Erin Orange County.

Maybe it was having a new baby at home and judging that I wasn’t adjusting to having two. Or maybe it was that said new baby rolled off the ottoman where I was changing her and slipped right through my hands (I cried more than she did).

It doesn’t matter the reason I guess, but a couple weeks ago I had a dream I just can’t shake.

It lasted about 90 seconds and was just a quick scene, no build up, no aftermath. My son died in the dream. My eyes opened the second it happened and I instantly knew it was a dream and that using basic physics the scenario was pretty much impossible, but a similar scenario wasn’t. (Disclaimer: I got an A in high school physics but my egg nesting on a bed of marshmallows inside a milk carton only made it to round two of the egg drop competition.)

Sorry that was my attempt to add humor to a not-so-funny story. Because, you see, after this 90 second dream that I instantly knew wasn’t real, the visual was so fresh in my brain and the sound his little head made echoed in my ears that I had a physical reaction. I immediately ran to the bathroom and threw up. I got back in bed (did I mention my husband was on a business trip?) and I did some deep breathing. Then I turned on the TV to try and get a different image in my head.

It stayed with me for days, even typing this out is making my stomach turn.

I knew he was safe in the moment. I didn’t even go to his room that night because it wasn’t about now. It was about the future, the “what if.”

I can go worst case scenario with the best of them. I like to be prepared: what would I do, who would I call, how would I cope. This scenario though, I had nothing. I don’t want to think about all the awful things that can happen in the world. I don’t want to worry, but I do.

I read the other day that the leading cause of unintentional death of a child 0-5 is drowning. You know what we did that day after I read the article? We went swimming at grandma and grandpa’s.

I refuse to let my fear hold me back. I will not let a world of “what if’s” have power over me.

But dear God I wish I had a bubble!

I have no family-size bubble.

What I do have is love, support, compassion, strength, and hope. That will have to be enough.