When I was offered free tickets to attend A Day Out With Thomas, I’ll admit, I hesitated. I have been hearing about this event for a few years now, and how much fun it is especially for young train lovers to get to ride on THE Thomas The Tank Engine. My son did memorize all the names of the trains in the Thomas world when he was three. I guess you could say he’s the target audience. But the one thing that had kept us from doing it sooner was the location. (It’s in Perris, Riverside County, about an hour from Anaheim).

Well, let me just say, it’s totally worth the drive!

First of all, the event takes place at the Orange Empire Railway Museum. This is a huge outdoor train depot that’s set up like a little town with various buildings you can walk between, lots of green space, and multiple vintage trains you can actually ride! This museum alone made the trip worthwhile.

Among the many trains and trolleys they had running throughout the property, was this classic steel trolley that once ran up Highland Avenue in Hollywood. As a big Disney fan, I got a kick out of learning that it was used by Disney Imagineers as the model for the Red Car Trolleys in the Disney California Adventure park. Fun fact: 717, the number on the trolley, is also the date that Disneyland opened in 1955: July 17th! Coincidence? I think not. 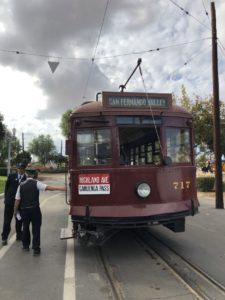 Day Out With Thomas

The Museum and its ride-able exhibits are open year round. However, the Day Out With Thomas only takes places during two weekends every November. On these dates, the whole facility is transformed into Knapford Station with so many family-friendly activities it feels like a small theme park. And the main attraction, of course, is riding a train being pulled by a life-size Thomas the Tank Engine! 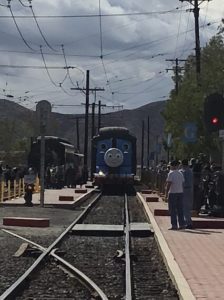 Your tickets are time-specific, so there’s no crazy long wait to get on board. In fact, though there were definitely a good number of people there, it never felt crowded or like we had to wait long to do anything. With young kids, that is a huge plus. And once you’re safely loaded and the train pulls out of the station, a cheery conductor narrates the 20 minute ride with fun facts about Thomas and trains in general. Each child on board gets this neat Junior Engineer certificate as a souvenir. 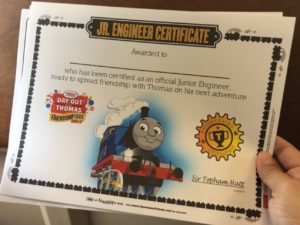 TIP: Sit on the side closest to the train depot. You’ll have a much more interesting view of the mountains and museum grounds, not to mention Percy the train as he whizzes past!

While a ride on Thomas is included in your event ticket (as well as all the other attractions I mention in this post), Percy is also available to ride for an extra charge. Even if you don’t ride him, you may get to see Percy in action on the tracks. 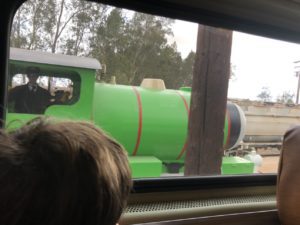 Though riding Thomas and Percy are the star attractions here, there is LOTS more to do at the event! We spent almost an hour in the Imagination Station, where they had multiple train tables for kids to play with and a mini Thomas for toddlers to ride. Right next to this was a tent where you could get temporary tattoos, and a petting zoo. In the center of the museum grounds was a big green space where they had a couple bounce houses, picnic tables, and Thomas-themed corn hole games set up for kids to enjoy.

Also in this green space was a small stage where a really fantastic kids music performer did live shows every hour throughout the day! His name was Nick from the Young Music Company, which is based in Long Beach, and he performed a combination of original and classic children’s songs, plus a really fun parent and child dance off using pre-recorded top 40 hits. I just need to give him a big shout out here because he performed all day long, and never lost his enthusiasm or patience with the kids who were all invited to join him on stage for a fun dance party. This activity alone was worth the cost of admission.

I want to point out here that this is not a sponsored post. We all just had such a great time – not only our train-loving son, but our toddler girl and both parents too – that I want to spread the word about this event. In addition to what I mentioned above, there was a train barn that played Thomas videos on loop all day if you needed a cool spot indoors to veg out for a while.

There was also a sizeable model train display that had some very special characteristics as far as model train displays go. This one was set up as a small town. But within this small town were Disney characters scattered among the regular residents (along with some Simpsons and other cartoons sprinkled in). We turned this into a Where’s Waldo type game for our kids, and all enjoyed this Thomas/Disney universe crossover.

I don’t have space to mention every single activity. So the last one I’ll point out is the stamp challenge, where you had to collect stamps from 4 locations. These could then be redeemed for free Thomas-themed bracelets, which make a nice parting gift.

The eats here were surprisingly varied. Stand outs in my memory were BBQ pizza, funnel cakes, hot dogs (beef/turkey/corn), greek gyros, and Carls Jr. We opted for greek and were pleased with the quality. We also got a frozen banana which was hand dipped in chocolate and sprinkled with nuts to order.

A Note About Safety

I would be remiss if I didn’t mention that as I was writing this post, I discovered that about an hour after we left there was an incident with a drunk driver at the event. This resulted in only 2 injuries to other guests, but it was a scary thing to occur nonetheless. While we were there we observed that the event seemed to have an abundance of staff, many of whom were in army fatigues and appeared to be ROTC or cadets. Everything was well managed, and it felt very safely run. In this day and age, terrible things can apparently happen anywhere. However, in my opinion this was not like a fly by night carnival operation.

There’s one more weekend left for a Day Out With Thomas. After that you’ll have to wait til next November, but it’s worth it. This event is ideal for preschoolers and big train fans. But there’s plenty of other activities to keep siblings entertained as well. Babies are welcome too, and there was a
“mothers tent” with changers and nursing chairs. So if your family is looking for something to do this weekend, a Day Out With Thomas would be a – dare I say – very useful way to spend the day.

Disclaimer: Though we received free tickets to this event, we were not required to write a post. All opinions are my own.