[box]Yesterday I wrote Part 1 in this series about what has happened during my year-long “hiatus” from writing for the Orange County Moms Blog. If you haven’t read that first post yet, click here to get caught up![/box]

Have you ever moved with 3 boys, 3 and under?

Do you have a husband who travels often for work and once “gave up” on packing from an apartment and thinks that leaving everything other than his clothes, some small keepsakes/mementos, xbox, and television is a normal thing to do?

We need to meet and have drinks!

Now you understand what I was up against. (Love him, but he admits that packing is not his forte—he just walks around aimlessly doing “circles.”)

Our search began way before kids. Heck, even before marriage. My husband and I moved in together and had a killer apartment in Newport Coast. That was until the financial crisis had fully reared its ugly head and rental prices skyrocketed. Our lease expired and our renewal was increased to the maximum amount legally allowed. We looked at that number and looked at each other and said, “That’s a house payment!” And so, we left behind our fancy digs and decided to move in with his Mom. “Only for 6 months, of course,” we said.

That was in September, 2011. Fast forward to today. It’s 2018. What began as a search for the traditional “starter home/condo” in 2011, morphed into “let’s find something we want to live in for a while” after we got married. And then we had Declan. “Hmmm… maybe we should look for something different,” we said. 15 months later, the twins came. That upped the ante. As they grew, it became clear that we needed a whole lot more space than we were originally planning for. And so, our search was once again modified.

We were fortunate we had his Mom’s place: we weren’t on a time crunch, we didn’t have to worry about leases, we were able to be picky. And picky we were. So picky. Mind-numbingly picky.

I’m pretty sure that when agents would see us walk into a home they were showing they would cringe because they knew we had such a crazy list of “must-haves” and had been on the prowl for such a long time. We were “that couple/that family.” We had put offers on several homes, but were beat out by investors, or all-cash offers, or a family older than ours who had significant equity to roll over into a larger home and therefore, the ability to put down more upfront.

It had everything we were looking for and it was (somewhat) in our price range. We went for it. It came down to us and another couple. We had apparently offered the same amount. We learned from the selling agent that the letter I wrote with our offer was what did the trick. In the letter, I had explained our long search, how it had changed over the years, and how we had been beaten out by foreign and domestic investors, etc. I described our family, what made us perfect for the house. I made it clear that this home was, and will be, our “forever home.” The homeowner selected our family. We were going to be homeowners!!!

And so, I return to my opening questions:

Have you ever moved with 3 boys 3 and under?

Do you have a husband who travels often for work and once “gave up” on packing from an apartment and thinks that leaving everything other than his clothes, some small keepsakes/mementos, xbox, and television is a normal thing to do?

Despite having to figure out how to pack everything with 3 rambunctious little boys and a husband whose idea of packing is not packing…it was worth it. Yes, there was so much packing. So much stress. So much unpacking. Did I mention stress?? But here we are. In our home. Ours. Not someone else’s. 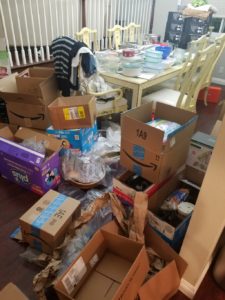 All of the heartache leading up to it is nothing compared to knowing that I am home.

[Disclaimer: Before y’all think we’re a bunch of moochers for living with my hubby’s mama for 6 years—we weren’t. After a few months, we took over the mortgage payment, paid the utilities, etc. We even paid for a complete remodel of the home and backyard/pool. So no. We are definitely not freeloaders.]

Stay tuned for Part 3 of my How Life Got In The Way post series. To be continued….